Ok, this will be the first project I’ll document on this blog. It will involve some electronics and an Arduino. As I am not familiar with electronics nor Arduino, I’m starting simple.

The plan is basically to have a couple of ultrasound sensors and a couple of vibration motors attached to the right and the left side of some glasses, so that when an ultrasound sensor perceives an object closer than a certain distance, the relative vibration motor start vibrating to alert the user of the incoming obstacle. If the left ultrasound sensor perceives an obstacle, the left motor vibrates and vice-versa. The nearer the obstacle, the stronger the vibration. So, yeah, I’m trying to implement some kind of very rudimentary echolocation, with a blind user in mind.

Maybe it will work well enough to actually be useful for navigation when sight is not an option, but most probably it will just be a nice toy to tinker with. Either way I will be pleased. 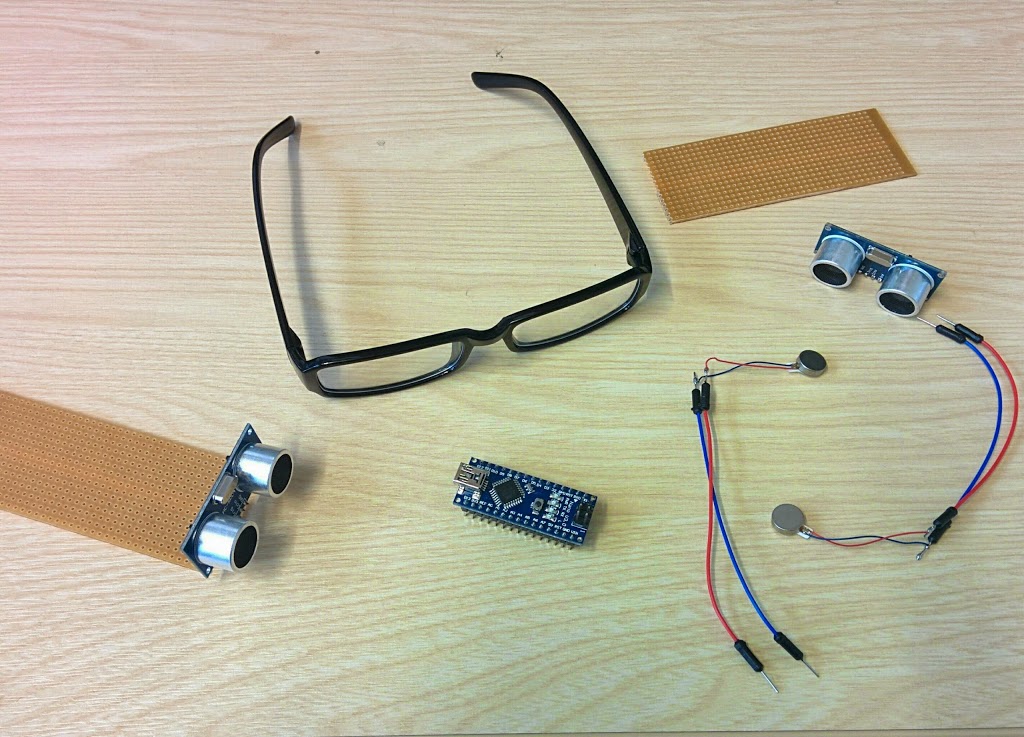 In the picture you can see some of the components that will be part of the object I want to build:

I decided to use the Arduino Nano as it is as powerful as a full-fledged Arduino, but… smaller.

As space here is an issue, I could have gone smaller by using other microcontrollers, doing without the usb port for example, or most of the pins. But for the moment I just prefer the ease of use and flexibility of the Nano. Maybe I’ll consider using something else for the final version.

The HC-SR04 sensors have a fair range (from 2 cm to 4 meters) and good-enough precision. Also, they are really cheap. Another option could be that of using optical sensors as they don’t have some of the downsides of ultrasonic ones. Ultrasonic sensors for example do not deal very well with sound-absorbing materials. On the other hand, optical sensors can fail to detect glass and dark coloured surfaces. Orientation matters as well, in both cases. So a good idea for later could be that of integrating the two modalities. But for the moment I’ll just stick with the ultrasonic sensors.

The ROB-08449 vibration motors are cheap and small, and that’s pretty much all I need them to be. I just hope their vibration won’t be too strong, as they will be positioned near the head, and it could easily get annoying.

In the next post, I’ll either show some code or the circuit I’ll use, so stay in touch if you want to know more.